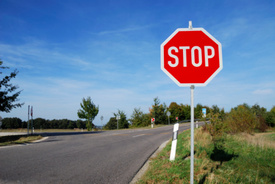 Legal news for New York motor vehicle accident attorneys—Eight were injured when a driver blew through a stop sign in Eaton.

Eaton, NY (NewYorkInjuryNews.com) – A two-vehicle crash injured eight people after one driver ran a stop sign in Madison County Friday night, January 22, 2010, according to the Post-Standard.

Madison County sheriffs responded to the scene of the devastating motor vehicle accident that occurred at 7 p.m. on Route 20. Police reported that one vehicle was traveling north on Route 46 and was struck by another vehicle, when the first driver failed to stop at a stop sign at Route 20. The driver of the first vehicle was identified as 19-year-old Dustin Conkey, who was traveling with passengers: 21-year-old Nikka Manwarren, 20-year-old Justina Manwarren, and 11-year-old Amanda White. Miraculously, everyone in Conkey’s vehicle survived with minor injuries.

The driver of the other vehicle that struck Conkey’s car, was identified as 48-year-old Scott Wiley, along with passengers: 14-year-old Madison Wiley, 9-year-old Rachel Wiley and 7-year-old Emma Wiley. The two youngest girls suffered from minor injuries, while Madison sustained severe leg injuries and was picked up by medical helicopter to receive treatment as soon as possible. She was flown to Upstate University Hospital in Syracuse where doctors and nurses cared for her. Scott sustained chest and neck injuries from the devastating crash.

Police issued Conkey a ticket for failure to stop at a stop sign and failure to yield the right of way along with other charges. It was not reported how many of the injured were taken to area hospitals for treatment. Alcohol was not a factor in this serious motor vehicle accident.