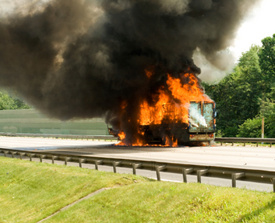 Farmington, NY (NewYorkInjuryNews.com) – A tanker truck barreled down the Long Island Expressway (LIE) flipped over, and almost claimed the life of one woman who had her emergency blinkers on, Saturday, January 23, 2010, according to The Star-Ledger.

A Bayonne woman was heading toward her parents house on the LIE, when her 2001 Dodge Neon began to have mechanical trouble. Maria put her emergency blinkers as cars quickly flew by her on both sides, when she suddenly spotted a tanker truck coming up fast behind her. As the truck continued in its path toward her, the 30-year-old woman was suddenly showered with shards of glass when the speeding tanker struck her car. Then the tanker truck then overturned and burst into flames in front of Maria Medina’s damaged vehicle.

Police and emergency medical services (EMS) arrived at the scene and found Medina with only minor injuries. She was pulled from her vehicle by a witness right before the tanker transporting 1,500 gallons of gas, exploded on the roadway near the Suffolk-Nassau County line. The driver of the tanker, 57-year-old Mujahid Shad, resident of Brooklyn, was said to have died instantly in the fiery wreck. Medina was taken to Nassau University Medical Center for treatment. Fire officials were on the scene.

The charred tanker reportedly burned for three hours after the crash. The pavement around the truck melted, and collapsed an overhead sign. A New York State Department of Transportation spokeswoman said, there were traffic delays on the LIE over the weekend, but traffic was expected to be back to normal for the new week after an emergency repaving of the eastbound lanes.