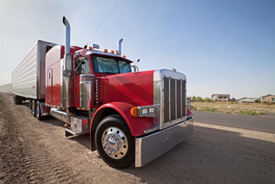 Cortland, NY (NewYorkInjuryNews.com) – New York State police reported to the scene of a motor vehicle collision that sent a tractor-trailer barreling through a residential property in Cortland, Monday afternoon, January, 18, 2010, according to News 20 Now. Route 13 where the tractor-trailer flipped over after colliding with a pickup truck that was towing a trailer.

The pickup truck driver was turning into a parking lot. The tractor-trailer was transporting lumber at the time, when he attempted to avoid a collision y slamming on his brakes. The semi driver could not avoid rear-ending the back of the farm trailer the pick up was totting from behind. The driver of the tractor-trailer lost control of his vehicle and flipped over into a local residence’s property. New York State police reported that the property sustained minor damages.