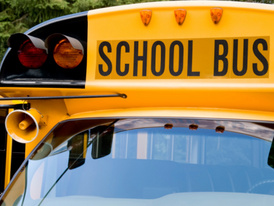 Hartford, CT (NewYorkInjuryNews.com) – A sport utility vehicle crashed into the back of a School bus transporting nine high school students Wednesday afternoon, January, 20, 2010, according to the Hartford Courant.

The motor vehicle accident occurred on Brookfield Street around 12:40 p.m. when the students from Great Path Academy were jolted by the SUV barreling into the bus. Police arrived at the scene to investigate the crash. Emergency medical services (EMS) were also called to the scene to attend to the injured.

Two of the students on board the school bus were transported to Connecticut Children’s Medical Center for complaints of back and neck pain. Their injuries were minor according to officials. The school’s principle visited the students while they were recuperating.

The drivers of the two vehicles were not identified. It was not clear if police pressed charges against the driver of the SUV. The high school students had been dismissed from school early due to mid-term exams. Police continue to investigate the motor vehicle accident.