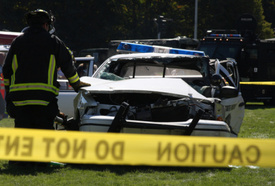 Morris, NY (NewYorkInjuryNews.com) — A New York State trooper was fatally injured while on duty when she collided with a semi truck on State Route 23, Wednesday afternoon, January, 20, 2010, according to WGRZ.

State police reported to the scene to find the female trooper fatally injured in the badly wrecked police cruiser. She was reportedly the heading back to Oneonta barracks after an assignment a local school when the collision occurred. Police identified the young officer as 31-year-old Trooper Jill Mattice.

Police reported that she had been heading east on State Route 23 when she collided with a semi truck traveling westbound for unknown reasons. Mattice’s injuries proved fatal at the scene. The deadly wreck occurred at 2:50 p.m. in Otsego County, 57 miles away from Syracuse. Troopers reported it was a side-impact collision.

Mattice was a six-year veteran of the New York State police department. State police said she was the first female trooper to die while on duty. She also functioned as a school resource officer for almost 3 years. The driver of the semi truck was identified as 33-year-old F.M. Sagggese, resident of NY. It was not clear if he was injured in the fatal wreck. Police continue to investigate to learn what caused the fatal and tragic motor vehicle accident.