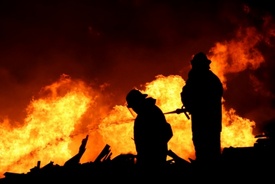 Teams of firefighters rushed to the scene where the fire had already spread to the surrounding rowhomes. When crews saw how quickly the flames were spreading, reinforcements were called to the scene. Firefighters began shooting water at the raging flames in hopes to deter it from spreading. When a fire reaches this size, and the flames travel quickly, there are more challenges that plague the firefighters already dangerous job.

A York City Fire chief reported concern for possibly calling an additional alarm to the fire. The number of people displaced from their homes due to the blaze was not known. One firefighter sustained second-degree burn wounds to his face. His identity was left undisclosed. It was not reported if the firefighter sought medical care at a hospital or at the scene.

No other injuries were reported in the three-alarm blaze. It was reported that the fire began in a vacant rowhome. One of the other rowhouses that sustained damages was a community policing station used by local officers. It was not known what caused the fire. Fire officials continue to investigate.