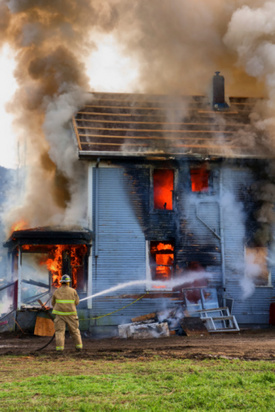 East Brunswick, NJ (NewYorkInjuryNews.com) – A Sunday morning house fire in East Brunswick injured one firefighter around 1 a.m., January 17, 2010, according to the Star-Ledger.

Three local township fire departments responded to the blaze. Police arrived at the scene on Pamela Court in the early Sunday morning hours. The flames were climbing out the windows of the first story as acrid smoke rose to the second floor. Luckily, police arrived in time to alert the residents to leave their home safely and also save the lives of three of their dogs.

One of the resident’s dogs sadly could not be rescued from the burning home, and he died due to the heat and smoke. One of the responding firefighters was also injured while battling the blaze. The unidentified firefighter was taken via ambulance to be treated at a local hospital. His injuries were considered to be non-life threatening.

The teams of firefighters successfully brought the flames under control within 15 minutes. The damages to the home were structural on the first floor and heat and smoke damage was reported on the second level. Fire officials continue to investigate the cause of the blaze. It was not believed to have been intentional.