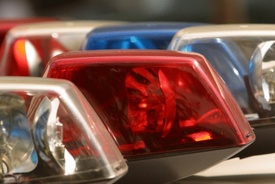 Roxbury, NJ (NewYorkInjuryNews.com) – A Roxbury 40-ton dump truck flipped and landed on the guardrail of Route 80, Friday morning, January 15, 2010, according to NJ.com.

The early morning New Jersey crash occurred when the driver apparently lost control of his 2006 Mack dump truck around 4 a.m. New Jersey State troopers and emergency medical services (EMS) responded to the crash that had taken place on the left side of Howard Boulevard ramp heading to Route 80 east.

When officials arrived at the scene, they found the overturned dump truck and rock salt scattered across the roadway. Rescue officials found the driver trapped in the truck. Officials extricated the injured truck driver from the vehicle, while police closed the ramp to Route 80 for several hours.

A trauma helicopter came to transport the wounded truck driver, identified as 40-year-old Nelson Reyes. He was air lifted to Morristown Memorial Hospital to be cared for by medical professionals. The extent of Ryes injuries were a fractured elbow and risk with other leg injuries.

It was not reported what caused Reyes to lose control of his vehicle. The Morris County Hazmat team arrived to remove the rock salt from the scene of the crash.