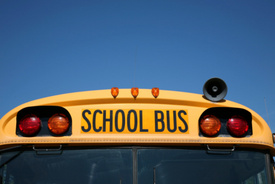 Lincoln, DE (NewYorkInjuryNews.com) – A three-vehicle crash involved a school bus picking up children from school at 8:06 a.m. on Costal Highway, Thursday, January 14, 2010, according to WBOC.

Delaware State police reported to the scene in front of Sugar Maple Farms development, where a car failed to notice the school buses activated stop signs and lights. Investigation revealed that a Dodge Neon driven by 49-year-old Rebecca Hopkins, who slammed on her brakes at the last minute and was rear-ended by a Subaru station wagon, driven by Adalee Flaherty. Police noted that both of the inattentive drivers failed to observe the bus’s stop signs. The impact of the two-vehicle crash launched the Neon into the rear of the school bus.

The bus driver was identified as 62-year-old Beverly Bonville. She and the children on board the bus went reportedly uninjured in the collision. Emergency medical services (EMS) arrived at the scene to transport the injured. Police reported that Flaherty suffered from a back injury and was taken for treatment at Milford Memorial Hospital and then was released. There were no other reported injuries.

Both Hopkins and Flaherty were issued tickets for careless driving and then they were released. Trooper closed the road to probe the scene of the motor vehicle collision. There were a reported 6 children on board the school bus at the time of the crash.