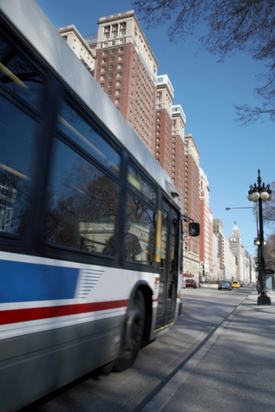 Wilmington, DE (NewYorkInjuryNews.com) – A car crashed into a parked DART bus and 14 passengers on board were treated for injuries Thursday afternoon, January 13, 2010 according to the News Journal.

Police reported that the 25-year-old driver claimed she was trying to pass the bus when she rear-ended it at the intersection of 19th and Market Streets at 1:10 p.m. The woman identified as Spontaneous Gordon was in a Toyota Corolla, which sustained minor damages.

Paramedics arrived and fourteen people on the bus came forward and complained of injury. They were all transported to the local hospital to be treated and examined by medical professionals. Authorities said that there were no major injuries amongst the victims. Another car was temporarily stopped bus when it was struck by a black Ford Crown Victoria. Police identified the driver of the first vehicle as a 34-year-old male from New Castle.

The Crown Victoria drove away from the scene of the accident and one of the passengers in the first vehicle was taken to the hospital for possible injuries. Police stated that the DART bus accident caused the second crash. Police charged Gordon with driving with a suspended license and improper passing.

DART First State is the trading name for the Delaware public transit system also known as Delaware Transit Corporation, according to Wikipedia. It operates throughout the state of Delaware.