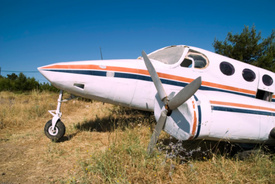 Waterbury, CT (NewYorkInjuryNews.com) – The Federal Aviation Administration (FAA) www.faa.gov investigate a plane that crashed into a power substation and claimed the life of a Maryland pilot, Wednesday, January 13, 2010, according to The Hartford Courant.

Officials reported that the small aircraft was descending for a landing a quarter of a mile away from the landing strip at Waterbury Oxford Airport when it plummeted to the ground, after losing contact with the airport tower. The plane struck a power substation before it crash-landed near Christian Street about 5 p.m. Connecticut State police and emergency medical services (EMS) rushed to the scene of the damaged aircraft. Medical officials extricated the critically injured pilot from the cockpit. He was the only traveler in the plane.

The pilot, identified as 50-year-old John W. Foster, was a resident of Bethesda, Maryland. He was transported to Waterbury Hospital, where he was cared for by doctors and nurses until his injuries proved fatal. The wrecked Glasair III fixed wing single-engine aircraft was registered to the pilot.

The airport did not temporarily shut down despite the nearby plane crash. Since the plane struck and damaged the power substation, 5,800 customers in the surrounding areas lost power, reported a representative for Connecticut Light & Power. FAA officials and the National Transportation Safety Board (NTSB) www.ntsb.gov continue to conduct a full investigation into the fatal aviation accident.