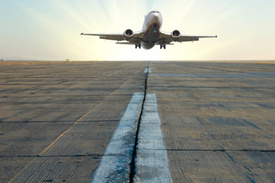 Newark, NJ (NewYorkInjuryNews.com) –A United Airlines plane was descending into the airport, carrying 48 passengers, when the pilot discovered that the landing gear malfunctioned, Sunday morning January 10, 2010, according to The New York Times. Flight 634 was making it s final descent into Newark Liberty International Airport when one of the landing wheels would not come down.

Surprisingly the planes skidded in a straight line despite the lack of a wheel, when it came to a halt. Relieved passengers and crew left the damaged aircraft through the emergency exit chutes. There were no reports of injury to any of the passengers or crew. There were only reports of praise and elation for the pilot’s safe landing despite the dangerous circumstances. Newark Liberty International Airport was temporarily closed for 20 minutes, than all three landing strips were re-opened for operation. Flights were delayed for half an hour afterwards.