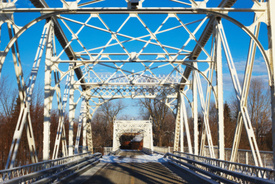 Legal news for New Jersey truck accident attorneys—A truck driver was rescued while his semi dangled off a bridge.

The semi truck was suspended over Parkers Creek for two hours while rescue teams worked tirelessly to free 41-year-old Ramond Joaneme, of West Babylon, New York. New Jersey State police were at the scene to investigate and assist. The accident occurred in the northbound lanes of the turnpike between exits 4 and 5 where a van had exited a service area and collided with the tractor-trailer.

The force of the collision sent the big rig crashing through an embankment and almost to a watery grave below. Police identified the driver of the van as 67-year-old John Monroe, resident of Mount Laurel. The wintry conditions made it difficult fore rescue workers to free the truck operator.

A medical helicopter flew Joaneme to Cooper University Hospital in Camden where doctors and nurses treated him for a fractured leg and shoulder and other facial injuries. He was reported to be in stable condition. Monroe was taken for treatment to Virtua Memorial in Mount Holly where he was treated for unspecified minor injuries. The dangerous wreck forced police to close all but one northbound lane of the turnpike for several hours. The investigation continues.
Bridget Hom