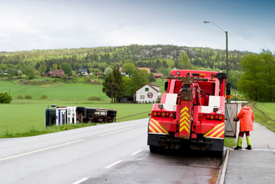 Police and emergency medical officials (EMS) reported to the scene of the accident, which took place along Route 12 near Wilson Bates Road. Police reported the motor vehicle accident to have occurred around 8 a.m. Monday morning, when the tragic crash claimed the life of one man amidst the holiday season.

Authorities stated that the crash took place when a semi truck traveling southbound on Route 12 collided with a smaller vehicle. The driver of the sedan struck by the semi truck remained unidentified. Officials pronounced the driver of the sedan dead. EMS paramedics transported the operator of the tractor-trailer via ambulance to Chenango Memorial Hospital where doctors and nurses treated his injuries. The unidentified truck driver suffered from leg injuries from the crash.

Police reported that the front end of the semi truck had collapsed after it went 40 feet off the roadway into a pond. Police officials temporarily shut down Route 12 until the afternoon for State police to continue investigating the fatal accident.