High school students dropped at school by a drugged-out driver 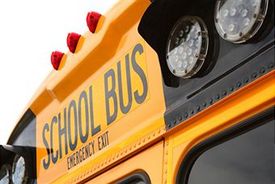 Auburn, MA (NewYorkInjuryNews.com) – A Massachusetts school bus driver had just dropped students off at school while she was high on drugs and swerving on Tuesday morning, December 1, 2009, announced the Boston Herald.

Police officials reported that the school bus driver had been under the influence of illicit drugs when worried drivers on the roads in Auburn contacted police to report the erratic school bus.

Massachusetts police identified the driver as 43-year-old Lisa Delorto, resident of Sutton. Delorto had recently picked up and dropped off students at Blackstone Valley Regional Vocational Technical High School located in Upton. Thankfully, when the school bus driver was reported erratically driving, there were no student traveling on the bus.

Police reported that Delorto had been given sobriety tests and had failed. She was also charged for possession of pills that she had no proof of prescription for. Luckily, there were no teenagers injured and the school bus was stopped before an accident occurred.

Delorto was scheduled to be seen for her charges of a DUI, negligent driving, a marked lane violation, and possession. It was not reported if she had a lawyer.