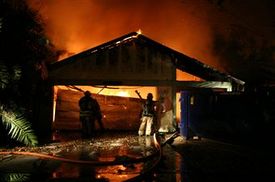 Washington Township, NJ (NewYorkInjuryNews.com) — A blazing fire at a three car garage injured one firefighter on Wednesday, December 2, 2009, according to Gloucester County Times.

Firefighters reported to the scene at the 200 block of Hurffville-Grenchloch Road mid-morning, where fire investigators believe that the blaze was caused by gas vapor, which caused an explosion. When firefighters were reporting to the scene they followed the thick black cloud of smoke that rose from the explosion. The entire garage was consumed in flames.

Investigators learned that the owner was moving a gas tank before the explosion. Responding police officers closed down the street to permit firefighters to run their hoses from Langley Drive and Carrington Court.

There were several motor vehicles inside the destroyed garage that were turned to rubble. Close to 36 Washington Township firefighters responded to the call, along with police and local emergency medical personnel. The Highland Fire Company of Pitman and the Deptford Fire Department Canteen unit also were on the scene.

It was not reported if the injured firefighter was transported to a local hospital for injuries. Investigators stayed at the scene to probe the situation for 2 hours after the morning fire.