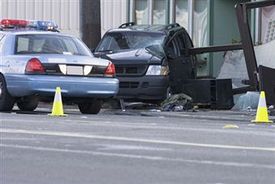 Sayreville, NJ (NewYorkInjuryNews.com) – A driver lost control of his vehicle and crashed into multiple vehicles on Route 9 on Sunday, November 29, 2009, according to the Star-Ledger.

Police identified the Sayreville driver as 22-year-old Robert Casiano, who was speeding in his 2003 Silver Acura when he crashed into a Rent-A-Wreck business parking lot and damaged 8 vehicles. Robert Casiano, 22, of Sayreville, was driving in the left lane of Route 9 near Bordentown Avenue about 1:45 a.m., when his 2003 Silver Acura suddenly swerved off the road into the parking lot, police Detective Jeremy Berry said.

The wreck also knocked down a telephone poll on the premises. The impact of the crash caused the vehicles engine to fall out and was ejected 50 feet before smashing into the ground. Emergency medical services (EMS) arrived at the scene to transport Casiano to Robert Wood Johnson University Hospital, where he was treated by doctors and nurses for moderate injuries.

Eye-witnesses of the crash reported that Casiano did not attempt to slow down before crashing into the lot. Police investigators continue to probe the crash.