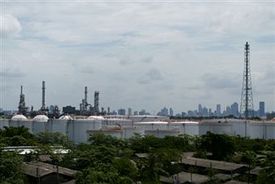 A reported 150 workers were in the building at the time of the leak. At the time the radioactive dust entered the air; fans turned on and blew it around inside the building. Sources reported that there was not a threat to the public, and there was no emergency declared. One worker was reportedly found to have been exposed to enough radiation as an X-ray.

NRC authorities and the Department of Environmental Protection (EPA) www.epa.gov continued to investigate to determine that the leak had stayed inside the building and had not entered into the public.