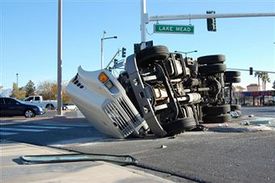 State police reported that the wreck took place on Route 3 around 2 a.m., which caused major traffic delays in Duxbury. All people traveling on Route 3 were advised to seek alternative roads of transportation due to the spill. The driver of the line painting truck was injured in the wreck.

Emergency medical services (EMS) arrived at the scene to transport the injured driver, identified as 37-year-old Christopher Mandeville, resident of Quincy. Christopher was taken via ambulance to be treated by medical personnel at South Shore Hospital for his non-life threatening injuries. He was cited for marked lines violations.

Crews cleaned up the propane that spilled when the truck tipped over for unknown reasons. Police reported that the right lane and the breakdown lane were reopened for normal traffic flow. At first, both directions of Route 3 were temporally shut down.