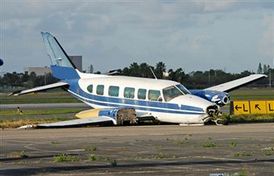 Police authorities reported that the pilot was a man from Florida, who had been nearing the runway to land his T-18 Thorp plane at Stewart International Airport, when he lost control of the aircraft late Monday afternoon.

Police and emergency medical services (EMS) arrived at the scene where the single-engine plane had skidded off the landing strip for 100 feet before it overturned in a marshy area on the premises of the Airport.

The small damaged aircraft laid on its roof, and the pilot emerged with only minor injuries and managed to walk away from the crash. Authorities reported that the pilot was 45-year-old Peter Damigos, resident of Trinity, Florida.