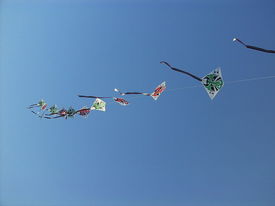 The teenage skateboarder, identified as “Jared”, was skating outside his home in Flushing, New York when he was clotheslined by a downed kite string. The kite’s string was lined with encrusted glass and sliced open the boy’s throat from ear to ear.

Jared collapsed to the ground with the wire ingrained in his neck. Neighbors rushed to his aid. The two good Samaritans turned the gravely injured boy over, while another man used his own shirt to tie around his neck to slow the bleeding. Jared was rushed to a local hospital where he required 400 to 500 stitches. Two of the teens lymph nodes were also lost in the tragic incident.

The boy’s parents are suing New York City and for even permitting the kite flying activity to be allowed in Flushing Meadows Park. The family is also suing the co-op complex for not immediately removing the hazardous wire that was left lying low between the two buildings.

Investigating police located the dangerous kite on the roof where it lay with 300 years of razor-sharp line. The family’s attorney stated that the New York City should be aware of the kite festivals that are occurring in Queens Park, which were motivated by the book and movie “The Kite Runner”.

The sport of kite-fighting — featured in the book and movie– is a sport largely played in South Asia and is a popular pastime in Afghanistan and Pakistan. The goal of game is for one of the two battling kites to cut the other persons kite down first with the sharp-glass-encrusted kite string, according to Wikipedia.

The lawsuit stated that power drills are used to reel in the sharp wire. People continue to battle the kites in Flushing Meadows Corona Park. Jared’s family filed the lawsuit in Queens Supreme Court to seek unspecified damages.