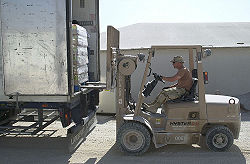 Hamden, CT (NewYorkInjuryNews.com) – The Occupational Safety and Health Administration (OSHA) www.osha.gov investigated a construction accident where a worker was crushed by a forklift while working on site to build dormitories at Quinnipiac University on Friday, November 13, 2009, announced the Hartford Courant.

Police reported to the scene of the fatal accident where a 58-year-old worker was run over by a forklift. The operator of the forklift reportedly put the machine in reverse on a hill, and then struck the worker. Emergency medical services (EMS) arrived at the scene, and began treating the severely injured worker while he was rushed to the Yale-New Haven Hospital. He passed away and was declared dead shortly after arrival.

Police reported that the accident occurred at 305 Sherman Avenue around 9:15 a.m., where OSHA officials are investigating the supposed accident.

The worker was employed by the company O&G Industries. His identity was not released due to pending notification of his family.

The university expressed its sympathies when vice president of public affairs, Lynn Bushnell stated that “the university community was saddened to learn of the construction worker’s death this morning and sends its deepest sympathy to his family and co-workers.”