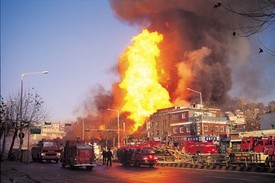 Legal news for New Hampshire Work-related Firefighter death attorneys—Three firefighters were injured battling a massive blaze before being taken by ambulances to the hospital, reported police.

Dozens of surrounding area firefighters responded to the scene around 6 p.m. at 242 West River Road, where panicked neighbors reported that the flames grew quickly and there were small explosions coming from the building. Locals reported that the building contained lawn tools such as snow blowers, chain saws, and other gasoline tanked items.

Police reported that the building owner said that people who were inside the building were safely evacuated from the scene. Three firefighters who were combating the flames were injured, and were transported to Massachusetts General Hospital for treatment. Two of the injured firefighters were released from the hospital, while one stayed for further treatment. The extent of their injuries were not specified.

Officials closed off the area from Scott Avenue to Cross Road, while crews cleaned up the massive amounts of debris until 11 p.m. Fire detectives arrived to attempt to determine the cause of the massive blaze.