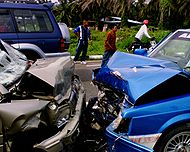 Police and Emergency medical services (EMS) responded to the scene of the crash on Route 581.

State police reported that the wreck took place in Camp Hill around 7:40 a.m., when three cars rear-ended one another. The crash took place when traffic slowed and 66-year-old Shianne Johnson, in her 2003 Kia Sedona, was struck from behind by 44-year-old Tonya Harden in her 2007 Toyota Corolla.

Harden was first rear-ended by a 2000 Nissan Altima, operated by Samantha Ingavo. The three-car pileup sent Ingavo and her passenger, 39-year-old Debra Hawk, to the hospital to be treated by doctors and nurses for their injuries. Their injuries were not specified by officials.

Police reported that Ingavo was issued a citation for speeding, which was the cause of the crash. Hawk had been reportedly wearing her seat belt, while Ingavo was not buckled into her seat. Police investigated the crash.