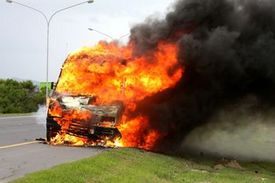 Syosset, NY (NewYorkInjuryNews.com) — A semi-truck overturned and exploded into flames on the Long Island Expressway (LIE) injuring both the driver and a passenger on Thursday morning, November 5,2009, announced WPIX.

The interstate was backed for miles Thursday morning before rush hour, after the semi crashed at 5:15 a.m. in the eastbound lanes near South Oyster Bay. The fiery crash threw debris across both east and westbound lanes of the highway.

Nassau police reported to the scene of the crash to find the truck driver and a passenger, who survived the crash. An ambulance transported both injured people to the Nassau University Medical Center.

The driver of the truck sustained significant burns but were not said to life-threatening. It was reported that they both suffered serious injuries and were treated by doctors and nurses. Their identities were not released.

Eastbound traffic at Exit 43 was blocked off while investigators to probed the situation to determine how the crash occurred. The westbound lanes were reopened soon after. Clean up crews picked up the scattered debris. The investigation continues.