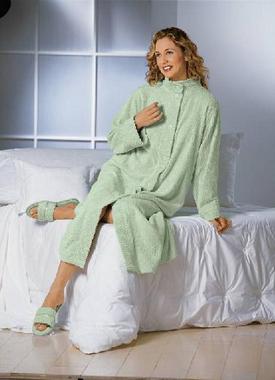 Hartford, CT (NewYorkInjuryNews.com) – A daughter from Connecticut is filing a lawsuit against Blair Company of Warren Pennsylvania for her mother’s death due to the Blair chenille bathrobes catching fire, October 27, 2009, announced WFSB.

The Pennsylvania online apparel corporation and the U.S. Consumer Product Safety Commission (CPSC) www.cpsc.gov voluntarily recalled the defective apparel for a reported nine deaths after the robes were deemed a fire hazard.

More than 160,000 of the luxurious chenille robes were recalled due to the likelihood of the robes catching fire easily. Sharon Davis has filed a lawsuit for the wrongful death of her late mother Atwilda Brown. Her mother had been making a cup of tea in her kitchen when the Blair robe she was wearing caught fire, and killed her in 2005.

Sharon reported that her mother’s death certificate clearly stated that she was fatally injured “from clothing catching on fire”. Initially, the Blair apparel company stated that the robes had in fact passed the product safety test. The CPSC recalled the garments in April, and then again in October 2009 after deaths were reported and the material was proved to be highly flammable due to federal product standards.

Sharon and her husband had all of their deceased mother’s mail forwarded to the house after the accident, and found the recall of the defective robes put out by the company. Sharon and her family were reportedly so upset that at this avoidable accident, that they filed a suit against Blair Inc. to inform others of the deathly hazard and to seek $30 million for a wrongful death.

Sharon stated that “Our primary goal, really, part of why we’re doing what we’re doing, is to get the word out,” she said. “We’re trying to reach as many people to warn them, and to check their closets and check the closets of their loved ones, especially older ones.”

Thus far, 300,000 of the robes have been recalled. A Blair spokesman said that the company does not comment on pending litigation’s. To learn more about the recalled Blair chenille robes, visit the www.cpsc.gov