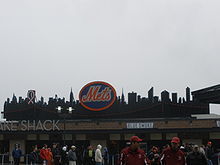 New York, NY – A Mets fan who was struck in the face by pieces of a broken maple bat in 2007 filed a lawsuit against the Mets, Major League Baseball and the bat manufacturer on Friday, August 6, 2010, as reported by The Wall Street Journal. The suit was filed on behalf of James G. Falzon in New York state court in Manhattan.

Falzon was seated in the second row along the third base line during an August 2007 game at Shea Stadium when Luis Castillo, using a bat borrowed from Ramon Castro, swung at a pitch that resulted in the bat breaking. Pieces of the barrel went flying into the stands and Falzon was hit in the face.

Falzon suffered multiple facial fractures, a broken nose, broken teeth and a shattered jaw. He now has metal plates and pins in his face.

The lawsuit claims the Mets and MLB failed to take adequate steps to protect spectators, especially from the “increased danger posed by shattering maple bats.”

In 2008, an MLB committee found that maple bats were three times more likely than ash bats to break in multiple places, according to WPIX.