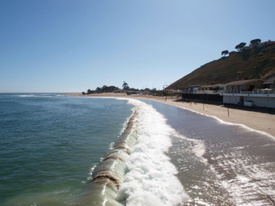 Los Angeles, CA – A Federal District Court found the City of Malibu guilty of violating the federal Clean Water Act through it discharge of polluted water into Santa Monica Bay beaches in a coastal preserve. The decision was announced via press release from the Natural Resources Defense Council on Wednesday, August 4, 2010

The court found Malibu liable for illegally discharging polluted water into a marine coastal preserve in one of the three dozen designated Areas of Special Biological Significance. The preserve runs from Latigo Point in Malibu to Mugu Lagoon in Ventura County. The alleged discharge happened in an area located in northern Los Angeles County.

The ruling came after a lawsuit brought by Santa Monica Baykeeper and the NRDC in March 2008. The suit sought to hold the city accountable to measurably reducing urban runoff, the top source of coastal water pollution in California.

The court further ruled that Baykeeper and NRDC will proceed to trial on the claims that bacterial contamination creates a nuisance at some 17 beaches in Malibu and violates bacteria water quality standards at Surfrider Beach and Malibu Creek and Lagoon. A trial date has not been scheduled yet.