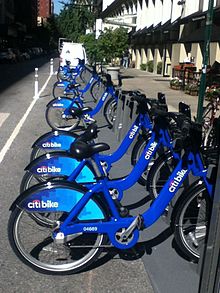 New York, N.Y.—New York City and Citi Bike are facing a $15 million lawsuit filed by a Connecticut man, who was involved in a bike accident that left him with traumatic injuries, reports, Westportnow.com.

The former chair of the Westport Planning and Zoning Commission, Ron Corwin, rented a Citi Bike at E. 56th Street and Madison Avenue on October 25, 2013, when he flipped over the front wheel after hitting a low barrier as he was leaving the docking station.

Corwin was not wearing a helmet at the time of the accident.

Corwin was hospitalized and subsequently suffered traumatic nerve palsy, causing him to no longer be able to taste and smell. His doctors fear it may be permanent.

The city has since painted the barrier orange and placed a construction cone next to it.