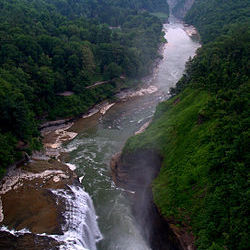 According to officials, Trooper Ross M. Riley was conducting high-angle rescue training when he fell from a ledge into Wolf Creek for unknown reasons.

Riley was rushed to an area hospital where his injuries proved fatal and he was pronounced dead. He leaves behind a wife and three daughters.

Following this unfortunate tragedy, our thoughts and prayers are with the family of Trooper Ross Riley. Trooper Riley was a devoted member of our State Police force, committed to protecting New Yorkers and ensuring their safety,” Gov. Andrew Cuomo said in the statement. “His dedication to his work is commendable and his service, no doubt, touched the lives of many. The contributions he made as a member of the New York State Police will never be forgotten.”

Investigations into the training accident are underway.