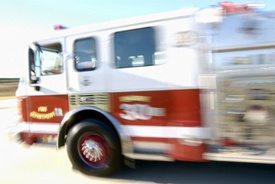 Newburgh, N.Y.—Five firefighters were injured in an accident on the New York State Thruway as they were responding to another accident. The accident occurred Saturday night, November 3, 2013, about 75 miles northwest of New York City around 9:10 p.m., reports ABC News.

According to Newburgh police, an oncoming car veered into the fire truck’s lane leading the Plattekill Fire Department truck to swerve and hit a guardrail, which caused it to roll onto its side and its roof.

Responding emergency crews transported the five injured firemen to nearby hospitals for medical treatment. Their injuries are said to be non-life threatening.

The driver of the car reportedly did not stop at the scene.

The identities of the injured firemen are being withheld at this time.