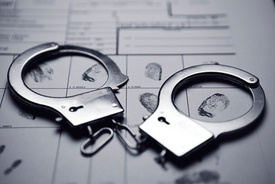 Queens, N.Y.—Two Queens police officers were suspended after being caught for allegedly selling accident reports to thieves, who are apart of an alleged insurance scam. The officers are suspended without pay after they were arrested on Wednesday, September 18, 2013, the New York Daily News reports.

According to reports, the NYPD officers Roberto Espinal, 44, and Danny Cano, 37, were arrested after being accused of selling reports from actual accidents to people involved in a large insurance scheme, which involves multiple suspects.

The officers were allegedly paid $40 to $800 per report they supplied to the middlemen.

Espinal, a 10-year veteran, and Cano, an officer for eight years, were each charged with receiving a bribe as a public servant and official misconduct.

In insurance schemes like this, the victims are asked to exaggerate their injuries for a payout, where doctors will overcharge insurance companies for unnecessary tests.

The Internal Affairs Bureau investigators reportedly utilized undercover officers and integrity tests to catch the officers after receiving a tip.