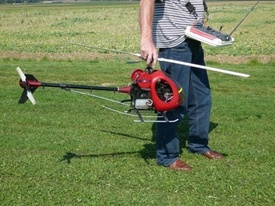 According to officials, Roman Pirozek, Jr., of Woodhaven, Queens, was fatally struck when his large model helicopter, measuring several feet from one end to the other, hit him and sliced the top of his head off.

Pirozek was pronounced dead at the scene by responding emergency medical professionals.

It is unknown at this time what caused the helicopter to hit him.

“A lot of people think they are toys, but these really aren’t toys,” Butch Wellbeck, a fellow enthusiast, said to the New York Times, describing 40-pound, precise scale models of real helicopters. “These are high-performance models and they can be very dangerous.”

It is common for helicopter enthusiasts to not wear helmets or protective gear while operating their models, but hopefully this accident will start to change that.