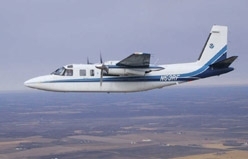 A twin-engine plane, a Rockwell International Turbo Commander 690B, operated by a pilot who previously crashed another plane on water, crashed his aircraft into a pair of Connecticut homes, killing two children in one of the homes.

This aviation accident occurred on August 9, 2013. The pilot, identified as Bill Henningsgaard, aged 54, his son, Max, aged 17 both of whom lived in Washington State, were on course from Teterboro Airport in New Jersey to New Haven as part of an east coast college tour when the plane went down in the town of East Haven at 11:25 a.m., crashing into two houses in the quiet, residential neighborhood.

The mother of the two children, who remains unidentified, was said to have run from her home, screaming “my children, my children”, as fire from the crash engulfed her home. Rescue personnel could not locate the children until the following day, when they were identified and pronounced dead at the scene. A witness, Robert Mallory, who works as an airplane mechanic and lives near the crash site, stated that he heard a strange noise coming from the plane just before it went down, and stated “it sounded like someone stuck a stick in a lawnmower”. After hearing the noise, he said the plane “just stopped.” The National Transportation and Review Board (NTSB) was on the scene investigating the tragic crash, as mandated by federal aviation law. The pilot, Mr. Henningsgaard had been involved in a plane crash as the pilot in 2009, when his plane went down in Oregon. The cause of that crash was said to be engine failure.

Jonathan C. Reiter, a New York aviation accident attorney, with offices located in the Empire State Building, who has handled many aviation crashes, stated the following regarding this crash, as follows: “The NTSB does a very thorough investigation, by examining the scene of the crash, inspecting what remains of the plane, speaking with eyewitnesses, and reviewing all other flight data, to determine the cause of the crash. It often takes months to get an NTSB report on the crash. The fact that an eyewitness, Mr. Mallory, described strange noises coming from the plane leads to a strong indication that the cause of the crash was some type of engine failure, though there will be no certainty without the final report from the NTSB.”

Mr. Reiter also addressed the ramifications of the crash on the two children that were killed in one of the homes, as follows: “ The liability for the tragic death of these two children is squarely on the plane, even if they were not passengers. In Connecticut, there are causes of action for conscious pain and suffering and wrongful death. In addition, under Connecticut common law, a cause of action for a bystander who is an immediate family member who is in close proximity of an accident, and who witnesses this tragic event, has a cause of action for his/her own extreme emotional disturbance, which appears to be the case regarding the mother of the deceased children.”