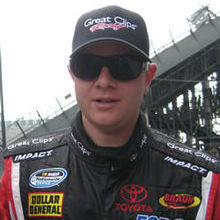 Swedesboro, NJ — Two-time winner on the NASCAR Nationwide Series, Jason Leffler, was killed in an accident during the heat race at a dirt car event at Bridgeport Speedway. The fatal accident occurred around 9 p.m. Wednesday night, June 12, 2013, the New York Daily News reported.

“NASCAR extends its thoughts, prayers and deepest sympathies to the family of Jason Leffler who passed away earlier this evening,” NASCAR said in a statement. “For more than a decade, Jason was a fierce competitor in our sport and he will be missed.”

The accident occurred at the 0.625-mile, high-banked dirt oval when Leffler’s car struck the wall.

The Delaware County (Pa.) Medical Examiner ruled Leffler’s cause of death was a neck injury.

Leffler was reportedly wearing a Simpson Hybrid head and neck restraint system, which is one of six approved for use in NASCAR, USA Today reported.

The cause of the accident is underway.

Leffler is survived by his 5-year-old son Charlie Dean.