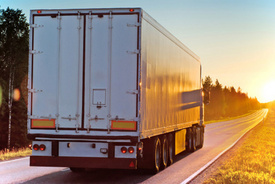 Truxton, NY — Seven people were killed when a trailer of a semi-truck loaded with crushed cars disconnected from the truck and slammed into a minivan in central New York. The fatal automobile accident occurred Wednesday night, May 29, 2013 in Cortland County, just south of Syracuse.

A semi-truck was reportedly transporting a trailer with crushed cards when it broke free from the rig that was pulling it. The trailer then crossed a rural two-lane road where it slammed into a minivan.

The driver of the minivan, Carino Vanorden, 24, and his fiancé, Lena Beckwith, 21, of DeRuyter were killed in the wreck.

The father of the two Meade children, Shawn Mead, was taken to Upstate University Hospital for treatment.

Investigators determined that the crash was caused by a mechanical failure. A part intended to securely lock the coupling between the tractor and trailer had failed, which led to the fatal crash. It is unknown why the coupling failed at this time.