Bicyclist Hit and Killed by Cab in Brooklyn 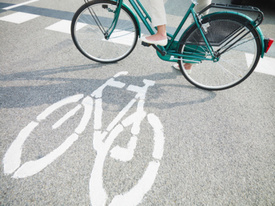 Brooklyn, NY — A livery cab struck and killed a bicyclist early Sunday, May 19, 2013 in the Crown Heights area. The fatal accident occurred on Eastern Parkway between Underhill and Washington Avenues around 1:15 a.m., MyFoxNY.com reports.

According to reports, the victim, who remains unidentified, was riding a bicycle eastbound on Eastern Parkway when he swerved in front of the eastbound cab and was hit.

Responding emergency medical crews arrived at the scene and rushed the victim to Methodist hospital, where his injuries proved fatal and he was pronounced dead.

The driver of the livery cab remained at the scene, and has not been publicly identified at this time.

Investigations into the bicycle accident are underway.

It is unknown if drugs or alcohol were factors, or if charges will be pressed.