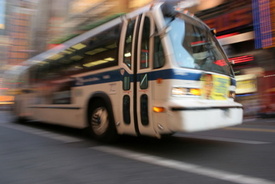 Hackensack, N.J. — Five people were taken to the hospital after a NJ Transit bus was involved in an accident on Thursday, May 2, 2013, at the intersection of Summit Avenue and Passaic Street at about 6 a.m., NJ.com reported.

According to police, the bus collided with a car when one of the vehicles ran the red light. It was unknown at this time which vehicle ran the traffic light.

The crash caused the bus to rip the traffic signal’s control box out of the ground.

Responding emergency medical crews rushed the four people on the bus and the bus driver to Hackensack University Medical Center for treatment of minor injuries. Their identities have not been released at this time.

It is unknown if anyone in the other vehicle was injured in the wreck.

Police investigators are conducting a full investigation into the bus accident.