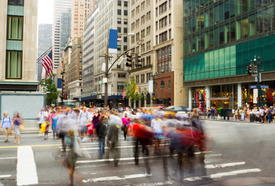 SUV-pedestrian Crash Report: An out of control SUV crashed into a Saks Fifth Avenue Wednesday, February 13, 2013, in Manhattan, injuring a pedestrian, according to reports received by New York City pedestrian accident lawyer Jonathan C. Reiter. The crash occurred at 10:51 am, when a careening Ford Escape struck an elderly man walking along the sidewalk. The SUV then ran into the building’s doorway.

The pedestrian, an 89-year-old man, was transported to Bellevue in serious condition, according to reports. The driver of the SUV was uninjured.

Owen Hane, a commercial real estate broker who witnessed the SUV-pedestrian accident, told the Wall Street Journal that the victim was unaware of the oncoming, out-of-control SUV, failing to notice the fleeing pedestrians, as he appeared to be looking down. The witness elaborated, “He went flying…It slammed him right into the door.”

The victim was later identified as Dr. Mansoor Day. His daughter reported to news sources that the doctor suffered “a broken neck, broken hip and two broken legs,” in the SUV crash, but that he was doing as well as could be expected and will hopefully recover from his injuries.

The driver at the wheel was charged with possessing a fraudulent insurance card, but was said to not have been driving recklessly.