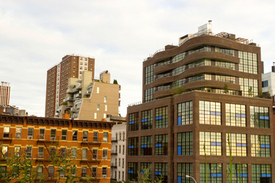 A 22 year old graduate of Cornell University was killed in a hit and run accident this morning at 3:00 a.m. in the Chelsea area of Manhattan. The driver of the vehicle was observed to be speeding in a southbound direction on the West Side Highway when he collided with the victim, who was standing on the corner near 23rd Street, just north of Chelsea Piers. The driver was then observed to take off without stopping, following the accident. Witnesses called emergency services that removed the victim via ambulance to Bellevue Hospital where he was declared dead. The victim is identified as Andrew Quinn, who graduated June 2012 and who was living in New York City and working in the real estate field. His grief-stricken mother, Linda Quinn, was quoted as stating, “I can’t believe anyone would do something like this, and take off after killing my son.” The New York City Police Department is investigating the accident to locate and arrest the driver. There was no information available as to the make or model of the car, or an identification of the driver, but a police spokesman reported “ it is only a matter of time before we apprehend this person and bring him to justice.” A full accident investigation is pending by the New York Police Department as required in all fatal accidents in the State of New York.

According to Manhattan pedestrian accident attorney, Jonathan C. Reiter, who has handled many motor vehicle and pedestrian accidents, there are many relevant facts, which remain to be seen pending the accident investigation’s findings. Mr. Reiter stated: “the issues which will be answered by the police accident investigation revolve around the location of Mr. Quinn when the initial impact occurred, what the speed of the vehicle was at impact, and where Mr. Quinn’s body landed following the collision. In addition, the police will be looking for the roadway’s lighting, and whether all lighting was operational at the time of the accident, as well as the extent of the damage to the vehicle, once it is located.” Mr. Reiter explained the significance of New York State’s laws regarding hit-and-run accidents, as follows: “In New York, it is a felony to run from the scene of a serious accident. The act itself infers the wrong-doer’s admission of liability for the accident, and may be used against him in a lawsuit by the decedent’s legal representatives. Under these circumstances the driver who slammed into Mr. Quinn and then ran off with the vehicle, instead of fulfilling his legal duty of staying at the scene, may be liable for his injuries and death.”

The preliminary investigation of this accident has not revealed further details, which Mr. Reiter states are crucial to the analysis of this accident and to the proximate cause of Mr. Quinn’s tragic death.