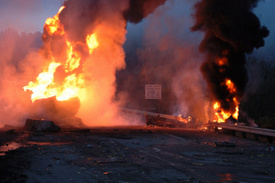 Manchester Township, PA — A chain reaction crash killed one driver and left two others injured after a mattress fell off a vehicle onto a Pennsylvania highway. The deadly automobile accident occurred Thursday afternoon, February 21, 2013, on Interstate 83 in Manchester Township in York County, ABC News reported.

State Police revealed that two service trucks from Dillsburg petroleum company slowed down because of the mattress on the roadway when a tractor-trailer crashed into the second truck from behind. The collision caused the second truck to crash into the first truck and caused it to catch on fire.

The driver of the second truck, Brian Jacobs of Dillsburg, was killed in the wreck.

State Police stated that the driver of the vehicle that lost the mattress stopped at the scene and are aiding in their investigations.