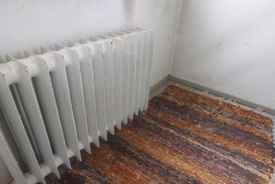 Manhattan, NY — A baby was burned to death after she fell off a bed and became wedged between a radiator and a piece of furniture in Manhattan early Tuesday, February 19, 2013. The death occurred at the Morningside Heights apartments on Cathedral Parkway around 6:15 a.m., the New York Daily News reported.

According to reports, 1-year-old Gabriella Grimes sustained severe burns on her leg after falling from the bed during the night. Her grandmother, Lourdes Carrigan, 60, discovered her at 6:15 a.m., and it is unknown how long she was stuck before she was found.

Gabriella was rushed to St. Luke’s Hospital where she was pronounced dead.

Another child staying at the apartment was not injured.

Carrigan has not been charged for the death at this time.