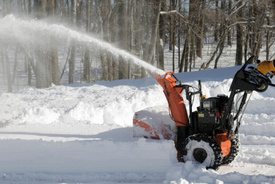 Roxbury, NJ — A snowblower severed a 56-year-old Landing man’s fingers while he was clearing snow Friday, February 8, 2013. The accident occurred around 6:45 p.m. on Shippenport Road in Roxbury, reported NJ.com.

According to police, the man was clearing snow when the snowblower became clogged. It is unknown whether the machine was turned off at the time or what caused his fingers to be severed.

The victim, who remains unidentified, lost his index and middle finger on his right hand at the first joint.

According to Roxbury Police Lt. Tim Driscoll, “Ninety-five percent of the time (with these accidents), there’s pressure in the (clogged) machine even after it’s turned off.”

It is unclear if responding emergency crews were able to locate his amputated fingers at the scene. The victim was rushed to St. Clare’s Hospital in Dover for medical treatment.

It is also unknown if a defect in the machinery also led to the accidental amputation.