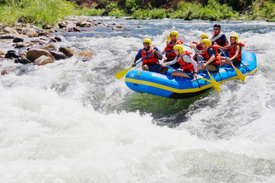 Indian Lake, NY — A whitewater rafting guide was sentenced to a year in Hamilton County jail and five years probation after he pleaded guilty to criminally negligent homicide when a passenger fell off his raft in a fatal accident last year, Poststar.com reports.

The drowning death of a rafter led Rory K. Fay, 37, of North Creek, to plead guilty to criminally negligent homicide, a felony, and misdemeanor counts of driving while intoxicated and aggravated unlicensed operation of a motor vehicle.

On Sept. 27th, 55-year-old Tamara Blake of Columbus, Ohio, fell out of a whitewater raft and drowned while Fay was guiding the raft down the Indian River. Blake’s body was recovered five miles downstream in the Hudson River.

Blake was wearing a life vest and a helmet at the time.

Fay also fell out and left Blake’s boyfriend, Richard Clar, 53, of Columbus, Ohio, to guide the raft to shore.

Hamilton County Judge S. Peter Feldstein handed down a sentence of 6 months in jail and 5 years on probation for the felony count, with additional jail terms of one year and 6 months imposed for the lesser charges, to be served concurrently, Poststar.com reported.

Fay was given a DWI and AUO charges because he drove the Hudson River Rafting Co. vehicle to the Indian River put-in while under the influence and with a suspended driver’s license.