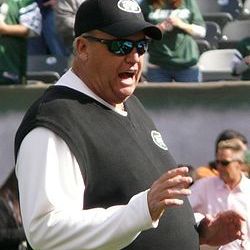 Bethlehem, PA — The New York Jets coach, Rex Ryan, was involved in a three-vehicle wreck, which, miraculously, did not result in any injuries. The automobile accident occurred Tuesday, January 22, 2013, around 6:13 p.m. at the intersection of West Third and Wyandotte streets in Bethlehem, WPVI reports.

According to reports, Ryan was driving a Ford Mustang when he collided with another vehicle on West Third Street.

Ryan reportedly passed through the red light at the intersection just prior to colliding with the vehicle. The impact of the wreck caused the second car to crash into a third vehicle.

Those involved in the wreck have not been publicly identified at this time.

Ryan was issued a warning and no citation for the wreck.