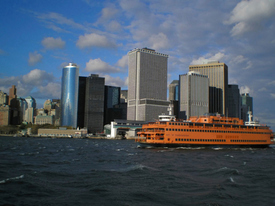 A commuter ferry carrying 326 passengers, which left from Highland, New Jersey to Wall Street in lower Manhattan struck the pier as it was approaching the dock in New York, jolting passengers out of their seats, and injuring at least 59 people, several critically. The boat was the Seastruck Wall Street ferry, which left Highland, New Jersey this morning at 8:00 a.m. and was due to arrive in Manhattan at 8:45 a.m. Instead, the ferry struck the pier causing a large gash in the dock, and damaging the front starboard side of the ferry. Aerial views of this tragic accident, showed scores of people lying on the dock, in stretchers, and immobilized by neck and back braces, awaiting transport to local hospitals. Two people were reported to be in critical condition with head injuries. The NYPD stated the one passenger was undergoing surgery for severe head injures at a New York hospital. Eyewitnesses stated that the ferry hit the pier at full speed. The Seastruck President made a public statement shortly after the accident stating “there was a strong jolt, with passengers being thrown out of their seats.”

Preliminary reports showed that Police and Fire Department had responded to the scene of the accident. The U.S. Coast Guard was also at the scene. A Coast Guard spokesman stated that the captain of the ferry was undergoing alcohol and drug testing, in accordance with maritime regulations. The National Transportation Safety Board stated that it would be sending a full team to investigate this accident.

Jonathan C. Reiter, a New York city personal injury attorney, who has handled many maritime accidents stated as follows: “The National Transportation Safety Board (NTSB) is a federal agency which is responsible for investigating all aviation and maritime accidents in the United States. It is a crucial investigation which may resolve the question of what caused this tragic accident, in the weeks and months to come. The captain will be tested for drug and alcohol use by the Coast Guard to determine whether he was under the influence of any banned substance, which would have impaired his ability to navigate this ferry. Moreover, the accident will be reconstructed to determine other factors, such as speed of the ferry, and maritime, weather and visibility conditions. There are many factors that remain to be investigated and determined to pinpoint the cause of this accident, though there is always a possibility of multiple factors working together to cause the accident.”

Mr. Reiter went on to discuss the injuries of the many passengers, as follows: “A ferry that hit the dock at full speed delivers a forceful impact to passengers in the ferry. The strong impact, which jolted passengers out of their seats, would cause whiplash injuries which can be quite serious, requiring months of physical therapy and possibly surgery in the future. Passengers who were standing would be thrown into walls and/or the floor, possibly causing more serious injuries such as fractures, and head trauma. The passengers who have head injuries including one passenger who is currently in surgery, face possible life long injuries and need for long term medical treatment, including rehabilitation care and pain management.”

It is a tragic accident like this that raises much needed public awareness of proper operations and safety of commuter ferries. The enormous risks of loss of life or limb require stringent standards of safety, which somehow, today, were not met.