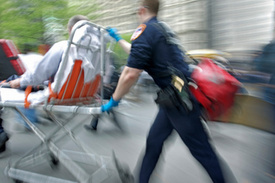 Saddle Brook, NJ — A two-vehicle accident on a northern New Jersey highway killed one person and injured seven others on Saturday, Dec. 9, 2012. The fatal automobile accident occurred around 7:30 p.m. on Route 80 westbound, the Houston Chronicle reported.

According to reports the driver of one of the cars had apparently lost control of his vehicle, causing it collide with another vehicle in the westbound lane.

The impact of the collision caused the two vehicles to enter the grass median on the right side of the highway where they overturned.

The driver of the first car was ejected, and responding emergency crews pronounced him dead at the scene.

A passenger in the first car sustained serious injuries in the wreck and remains hospitalized.

Six other people in the second car suffered minor injuries, and were taken to a hospital where they were treated and released.

It is unknown at this time what caused the driver to lose control.

Identities are being withheld at this time.