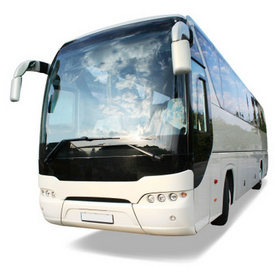 Bus Accident Attorney Report — A tour bus bound for New York, flipped on interstate 80 in New Jersey, injuring at least 23 passengers on October 17, 2012. No fatalities were reported. Preliminary investigation showed that the bus flipped over an embankment next to the highway at Route 46/23 at 7:40 a.m. The bus landed on its side at the bottom of the embankment. Three women passengers were reported to have been trapped under seats of the bus and were removed by EMS. All three women were taken to area hospitals via ambulance, and were in critical, but non-life-threatening condition. Five children were among the 57 passengers, and miraculously escaped injury. Most of the other victims were treated for lacerations, bruises and other injuries, including the driver who suffered a laceration in his arm.

Tour and charter buses are generally used for the long distance travel of large numbers of passengers. These buses are generally owned by private companies, and are controlled by both Federal and State regulations that impose higher standards of safety than on a regular motor vehicle. According to New York bus accident attorney, Jonathan C. Reiter, who has handled many cases of tour and charter bus accidents, safety, is of utmost importance when it comes to tour buses. He stated: “The tour bus involved in this accident is required both by state and federal regulations to operate the bus at very high levels of safety. That means that the driver must be certified to drive this type of tour bus, and have a record of safe driving as well. When an accident of this type occurs, where a bus flipped over, the first cause to be looked at is driver inattention and speeding. Rollover accidents can also be caused by the faulty design of the bus, or by defective parts. It is possible that this crash was caused by a combination of factors, the exact nature of which will be determined through the extensive accident investigation that will be conducted by the local, state and federal authorities.” The federal and state regulations require a level of safety that is substantially higher than for regular motor vehicles and the owners of tour buses must carry high levels of insurance, which can cover for the injuries that usually occur from bus accidents. Mr. Reiter explained as follows: “The first level of concern and inquiry in this type of accident is ‘was the driver properly trained with the proper credentials, and did he have the skill to safely operate the bus?’ And the next level of inquiry is related to the bus’ design and parts and whether those factors were a contributing cause of the accident.”

Mr. Reiter also noted that the U.S. Department of Transportation has identified a critical need for more extensive safety rules for the operation of these types of buses. Mr. Reiter stated as follows: “The fact is, that according to the U.S. DOT, there are 12,000 people injured and over 300 people killed per year in the US from tour and charter bus accidents. The companies that own tour and charter buses must do a better job at qualifying their drivers so that the buses are being operated in as safe a manner as possible. There should be strict procedures to test the drivers’ ability to operate the bus. Since speeding is such a major factor in these types of accidents, there should be a rule that if a driver is caught speeding, it should result in his immediate termination from operating a bus.”

Safety is the major concern of the federal and state authorities, and as the Department of Transportation has reported in a recent study, thousands of people have been injured and/or killed in these crashes. It appears that the governmental authorities will do everything possible to ensure that the number of injuries and deaths are cut down in the future, through the promulgation of more rules and regulations, to ensure that passengers of tour and charter buses arrive at their destinations safely.