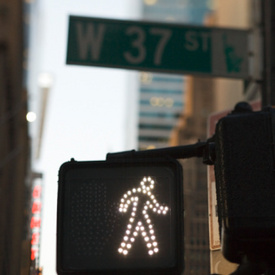 Manhattan Pedestrian Accident Attorney Report — In a scenario that has become far too common on New York streets, a pedestrian was struck and killed while crossing a street in Midtown Manhattan. The man, identified as Ken Baker, aged 26, was walking northbound on Sixth Avenue near West 47th Street around 3:45 a.m. when the truck, attempting to make a left turn from Sixth Avenue onto West 47th Street, struck and killed him. The driver of the truck stayed at the scene of the accident and was not charged with any crimes, pending further investigation. The truck was identified as a large Peterbilt 2007 truck. It was not carrying a trailer at the time of the accident. Mr. Baker, who sustained wounds to his torso and arms, was removed from the scene by ambulance, and taken to Bellevue Hospital where he later died.

According to Manhattan pedestrian accident attorney, Jonathan C. Reiter, who has handled many truck and pedestrian accidents, the City of New York must do more to prevent these type of devastating accidents, as follows: “The type of accident that occurred here has, sadly, become all too common, over the years, in Manhattan. Large trucks are traversing the roadways that were not originally designed to withstand truck traffic. Pedestrians crossing large thoroughfares in Manhattan and obeying all the rules of staying in the cross-walk and crossing on the “walk” signal, are, nonetheless, taking their lives in their hands, against trucks that are making turns into these same cross-walks.”

A multitude of traffic studies have been performed as a result of the high number of pedestrian accidents in Manhattan. Mr. Reiter went on to state: “While numerous studies have resulted in the City implementing safety measures, such as placement of more lights and signals at corners and pedestrian cross-walks, there are recent studies that recommend that cross-walks be moved to the middle of the block, rather than the end of the block, to further protect pedestrians. Unfortunately, for Mr. Baker and others, these are only preliminary studies and have only been tried at a few streets in lower Manhattan.” The results of these traffic studies will be available as time goes on, to determine if moving crosswalks will result in fewer accidents. Mr. Reiter explains “It stands to reason that if cross-walks were moved to the middle of block that the pedestrian crossing at that location would have more distance of roadway to protect him from a turning truck.” The goal is safety, by cutting down the incidence of these very tragic accidents, in which a pedestrian hardly has a chance of surviving the impact from a heavy truck.