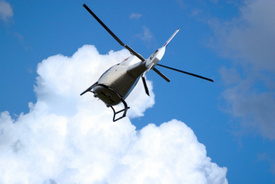 According to officials, the helicopter was inspecting transmission lines for New York State Electric and Gas when it went down. NYSEG did not own the helicopter.

Witnesses reported that the helicopter clipped a power line near the World Kitchen building, which temporary knocked out power before crashing along a dike on the river.

“NYSEG is deeply saddened by this tragic accident,” the company said in a statement. “Our thoughts and prayers are with the families, friends and co-workers of the two men who were killed in today’s crash.”

The identities of the deceased have not been released at this time.

The Federal Aviation Administration and the National Transportation Safety Board are investing the aviation accident.